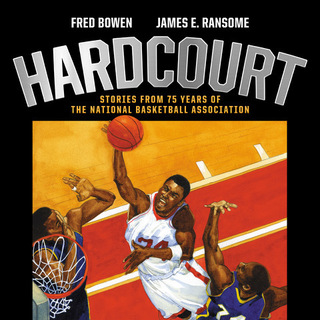 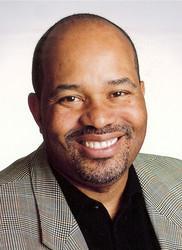 He lives in New York's Hudson River Valley region with his family.

This enlightening history of the National Basketball Association is brought to life by vibrant, action-packed illustrations. The story begins right after WWII, when any idea of a professional basketball league was considered a hopeless dream, and it takes readers through the tough early days of playing in high-school gymnasiums to the gradual rise of superstars and power teams to its current status as a major sports and entertainment global franchise. The text highlights major milestones (1949: Sweetwater Clifton, an African American, signed by the Knicks; 1962: Wilt Chamberlain's 100-point game), rivalries (Magic and Bird, Celtics and Lakers), and players (Michael Jordan, LeBron James, Kobe Bryant). There are nods to early all-Black teams, the 1992 Olympic Dream Team, and current international players, presented in chapters that flow like a typical game (from "Tip Off" to "At the Buzzer"), all supported by glorious watercolor paintings that span pages and facing spreads. Back matter includes lists (champions, MVPs, franchises, NBA/ABA career scoring) and an extensive bibliography. This attractive offering will enhance school and public library collections, especially when paired with titles like Madison Moore's More than Just a Game: The Black Origins of Basketball (2021). Be prepared for it to fly off of shelves.

Avid basketball fans will eagerly drink in this narrative nonfiction account of the game's evolution. Starting with a look at the sport's humble peach-basket beginnings in 1891, the book goes on to cover the development of the 24-second clock, the establishment of the National Basketball Association and the American Basketball Association, the creation of the Olympic "Dream Team" of 1992, and more. Frank discussion of racial segregation and the integration of the NBA in 1950 provides an opportunity for children to discuss some of the sport's less noble history. With a list of league information, current at the time of printing, and an index included in the backmatter, this book can answer some quick trivia questions....Ransome's painterly illustrations are primarily portrait-driven, giving life and character to past icons such as Larry Bird, Magic Johnson, Red Auerbach, and more.

Celebrate seventy-five years of the NBA in this exciting and beautifully illustrated middle grade account of the legendary athletes, coaches, and teams that changed basketball forever and created a national phenomenon enjoyed by millions today.

The National Basketball Association is the biggest league for one of the nation's most beloved sports. Played in massive stadiums by athletes who are now household names, with millions of fans around the world, basketball has truly become a global phenomenon. But it didn't always exist the way we know it now.

Follow basketball from its humble beginnings as a casual indoor pastime played in gyms and colleges through its evolution for seventy-five years of hardcourt history. The NBA gained legions of fans thanks to the introduction of rules like the three-point line and the twenty-four second clock, and teams such as the Harlem Globetrotters, who paved the way for desegregated teams. Discover the story of the legendary Olympic Dream Team of 1992 and beloved players like Larry Bird, Magic Johnson, Michael Jordan, and LeBron James, along with the early game-changers who made basketball what it is today.

With the expert storytelling of veteran sportswriter Fred Bowen and stunning full-page illustrations from award-winning artist James E. Ransome, experience the biggest and best basketball league in the world, the NBA.