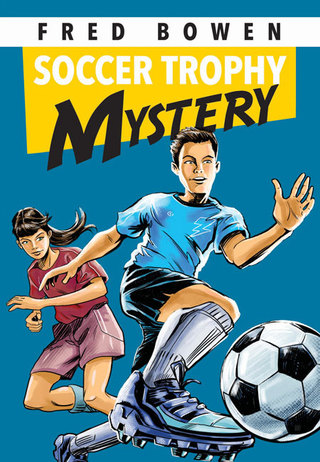 Bowen has written another hit entry in his Sports Story series, with engaging characters, lots of sports action, and a unique mystery. An excellent choice for readers looking for a more modern-day Matt Christopher story.

Twins, Aiden and Ava, play soccer in their county's under-14 boys and girls leagues.  They want their teams to win the league championships so their team names will be on the county trophies.  Aiden and Ava learn that the original championship trophy disappeared from the county library years ago and has never been recovered.

The men's World Cup soccer championship, which has been played since 1930, may be the most popular sporting event in the world.  A French sculptor designed a gold-plated trophy for the first championship.  In 1970, Brazil became the first country to win the World Cup three times and so got to keep the original trophy.  In 1983, however, thieves broke into the building where the trophy was being displayed and stole the trophy.  The police investigated but never recovered the trophy.

The mystery lives on.  What happened to the most famous sports trophy in the world?  Could it be somewhere waiting to be found?