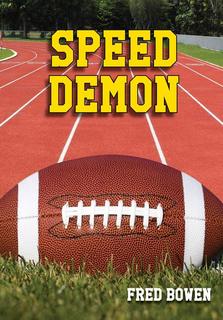 Tim Beeman is the "new kid" at Hilton Prep.  He is also the fastest kid in the freshman class.  So fast, he's called him the Speed Demon.  The Hilton football coach and some of the other kids are pressuring Tim to play football.  They say with his speed Tim will make a terrific wide receiver. Tim is tempted because football is a big deal at Hilton.  But Tim is not sure he will like taking the hits that wide receivers take after they catche the ball.  What will Tim do?

Not many athletes are awesome at two sports. But, like Tim in the story, Bob Hayes was awesome in track and football.  In 1964, he won Olympic gold medals in the 100-meter dash and the 4X100 meter relay and he was declared "the world's fastest human."

With his blinding speed, Hayes was almost unstoppable as a wide receiver for the Dallas Cowboys.  Hayes scored 75 touchdowns during his 11-year NFL career and helped the Cowboys win Super Bowl VI in 1972.